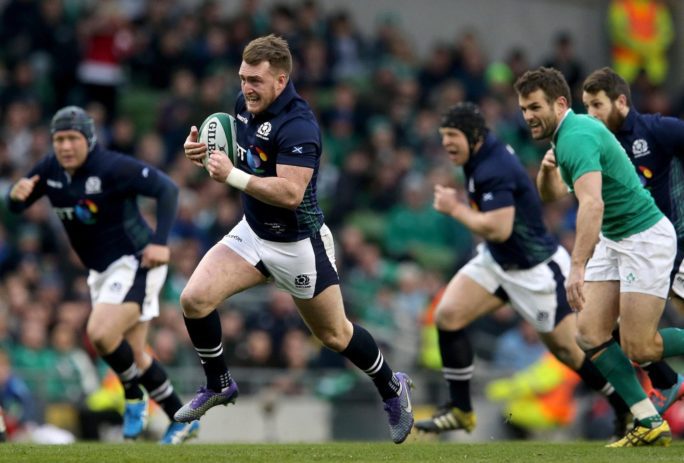 It’s not surprising that after last years performances, fans are feeling optimistic about Scotland’s chances in the 2018 RBS 6 Nations. It is looking to be another record breaking Scottish rugby year, with 6 Nations tickets pretty much all sold out already!

RECORD BREAKING SCOTTISH RUGBY
Tickets for both 6 Nations home-games at Murrayfield are selling out in record time once again. That’s 67,144 seats filled faster and faster each year! Scotland are opening their 2018 6 Nations campaign against Ireland on the 11th February. With so many excellent players available to play, and many who are new to the international team, it’s sure to be a 6 Nations to remember!

It’s the first 6 Nations tournament for head coach Gregor Townsend, who coached Scotland to great results in his first home games in the Autumn Tests 2017.

GUINNESS PRO12
Last year, one of the big stories in rugby was the change in format of the Guinness PRO12…or what is now, the Guinness PRO14! The format of the competition has changed and it is now a cross-continent championship. Two South African teams, the Toyota Cheetahs and the Southern Kings (who both lost their Super Rugby status), have joined. PRO14 bosses say, this makes the competition even more competitive on the field, opens up new territories and attracts more broadcast and sponsorship interest. A win-win, surely?

The new conference style set up sees the 14 teams split into two seven-team conferences. Each is made up of two Welsh teams, two Irish and one from South Africa, Italy and of course Scotland. The teams in each conference will play each other, home and away, before all teams from conference A play each team from conference B. That’s 19 matches. Additionally, each team will play derby fixtures against teams in the same nation, but different conferences (are you still with me?!). That takes the match total to 21, with the derby games meaning Edinburgh and Glasgow will face each other three times in the regular season. Not a bad thing, who doesn’t love watching those two go toe-to-toe! If you want to see the conference splits for this year, and read more on the set up (and how to win!) check out this BBC report.

2018 FIXTURES AND BEYOND…
There are no fixtures for Scotland’s Autumn Tests released as yet. But, for the organised among you, there are fixtures for the 2019 6 Nations here. With all the PRO14 action and this years 6 Nations to distract you, the Autumn Tests will be here before you know it! There is something more exciting ahead for 2019 though…the Rugby World Cup! Scotland will be keen to put the drama of the previous World Cup behind them and go all the way in Japan 2019. We are in Pool A this year, with Ireland, Japan and two other still to be confirmed.

WARM UP AT THE DUNSTANE
Each time Scotland are playing at Murrayfield we’ll be here with Orkney Steak Burgers and Beer, as well as plenty of other alcoholic and soft drinks. Whatever the weather we’ll set you up right for the match and you never know who you might see here as Rugby greats past, present and future have been known to make an appearance at The Dunstane…!