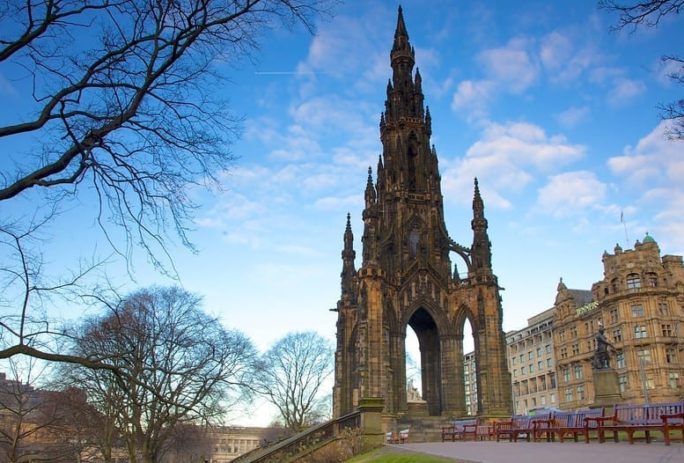 Part of visiting Edinburgh isn’t just about seeing the sights, eating and drinking, Scotland is a country rich in history and culture, plus much, much more. To help get you started here’s a short blog on just some of the fascinating literary history in Edinburgh.

Scotland is known around the world as the country that exported some of the best inventors like Alexander Graham Bell, top musicians like Lulu and The Proclaimers and of course writers! There are so many writers we could talk about, this could end up being a very long blog…so let’s look at one or two and take a quick dip into the fascinating world of Literary Edinburgh.
The Classics

When you get off the train at Waverley and wander along Princes Street, you might not realise it, but you’ve already witnessed two examples of the unwavering legacy of Sir Walter Scott. Published in 1814 “Waverley” was Scott’s first venture into Fiction, was published anonymously and was so successful that his later novels were advertised as being by “the author of Waverly”. So, Edinburgh has what could be the only station in the world named after a book. The everlasting tribute to Scott is standing tall on Princes Street – the Scott Monument. Following Scott’s death on 1832, a competition was held to design a monument to honour him. The winning architect was joiner and self-taught architect, George Meikle Kemp. The statue has a statue of Scott and his dog between the four supporting columns and the monument is decorated with the likeness of 93 people, plus a dog and a pig! The people are all characters from Scott’s novels such as, Flora MacIvor from Waverley, Rob Roy the title character of Rob Roy and Jock Dumbie from Heart of Midlothian. Heart of Midlothian (Hearts) is the name of a professional football team from the west of Edinburgh. Another way Scott’s works are living on.

Sir Walter Scott isn’t the only historic Scottish writer from Edinburgh. Our city was also the birthplace of Treasure Island and Dr Jekyll and Mr Hyde author, Robert Louis Stevenson and Sir Arthur Conan Doyle. The man we have to thank for bringing Sherlock Holmes into our lives. There is a statue to Sir Arthur Conan Doyle on Picardy Place, close to where he was born. There is also a pub named after him. Stevenson also has a statue in Colinton village, where his Grandfather lived, and Stevenson used to go to church.

Modern Masterpieces
If I ask you to name a book written in Edinburgh, I’d be willing to bet there’s one author that jumps straight to your mind. Local resident and National treasure – J.K Rowling! The success of Harry Potter was phenomenal, am sure many people can remember waiting impatiently at the bookshop for the latest Potter adventure to be released and then devouring the book in a day. We are so in love with Potter and his world, there is an upcoming stage show of Harry, Ron and Hermione in their later years and this year sees the release of Fantastic Beasts and Where to Find Them, starring Eddie Redmayne. It’s been well documented that J.K Rowling sat in the back room of the Elephant Cafe and wrote much of the earlier Harry Potter books there. From the cafe she could see the roof tops of George Heriot’s School – the inspiration for the Hogwarts Castle. The Elephant Cafe has also frequented by other Scottish writers, including Edinburgh’s favourite crime writer, Ian Rankin.

We were slightly disappointed when the rumour that Edinburgh Airport was to be re-named Ian Rankin Airport in his honour, was nothing more than an April Fool’s joke – thanks Forth1! Regardless, the Rebus novels are perhaps Rankin’s most famous and there are now 20 to get your teeth into. Though Edinburgh like to claim Rankin as their own, if you’re being picky he’s from the great Kingdom of Fife, he graduated from Edinburgh University and then spent three years writing novels, when he was supposed to be working on his PhD!

Literary Edinburgh Book Tours
As you can imagine, Edinburgh is not short of fascinating book tours. We are still trying to find time to go on one (or all!) of these tours but with so many to choose from which will you do first? The Edinburgh Book Lover’s Tour , the Rebus Tours or how about the Potter Trail? The Edinburgh City of literature has a huge list of tours and a wealth of information about Literary Edinburgh. After all that walking you’ll be exhausted, so we’ll get the chefs in The Ba’Bar to rustle up some delicious food and then you can snuggle up in one of our king-sized beds with a good book or get inspired to write your own perhaps…