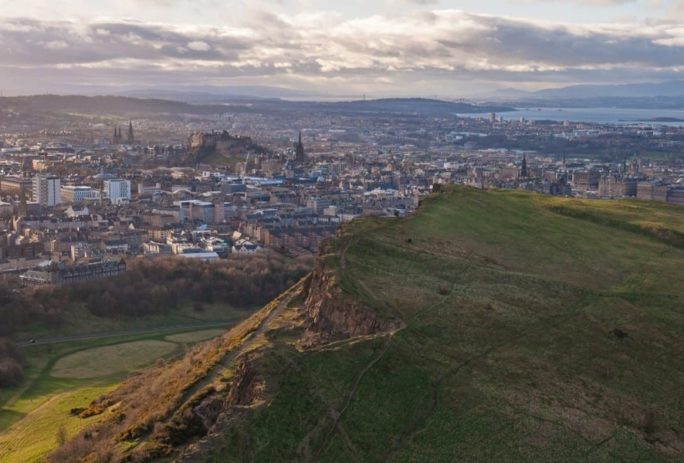 Scotland is known to have many mountains and hills, such as Munros (mountains over 3,000 feet) like Ben Nevis, Schiehallion and the Cairngorms. One of the most famous hills, is arguably Arthur’s Seat. An 822ft extinct volcano at the heart of Edinburgh’s Holyrood Park.

ANCIENT HISTORY
There is archaeological evidence of people being settled on Arthur’s Seat from the Stone Age, with the volcano itself being over 350 million years old. The evidence suggests life was tough for those on Arthur’s Seat, with evidence of tribal fighting and Roman invasion found in the area. During the 12th Century, the land around Arthur’s Seat was given to Holyrood Abbey, which had well established farms and brewery’s in the area and during the 13th Century St Anthony’s Chapel was built. The ruins of which can still be seen at the foot of Arthur’s Seat.

WHO IS ARTHUR?
Stories of how the name ‘Arthur’s Seat’ came about vary from family to family. Each child is told their own version that has been handed down through generations. Some say, King Arthur himself stopped on the ledge, sitting down to warm himself on the volcano, others have other tales linked to the famous Arthur Pendragon. However, the more realistic version comes from the gaelic name Ard-na-Said, which means height of arrows.

WHY VISIT ARTHUR’S SEAT?
Some of the most iconic images of Edinburgh have been taken from the top of Arthur’s Seat. It sits in the 640 acre Royal Park, next to the Queen’s official residence in Scotland, the Palace of Holyroodhouse, and so many residents and visitors alike spend hours walking around the park and Duddingston Loch. A registered site of special scientific interest, there are hundreds of species of flora to be seen, as well as the breathtaking views (on a nice day!) across the whole of Edinburgh, the Forth Valley and even way across the Firth of Forth to the Kingdom of Fife. On a really good day, you can even see Ewan McGregor sprinting up…although that might just have been a scene in Trainspotting 2.

A visit to Edinburgh isn’t complete without a walk up Arthur’s Seat, or a Gin tasting at the Dunstane Houses now we think about it!